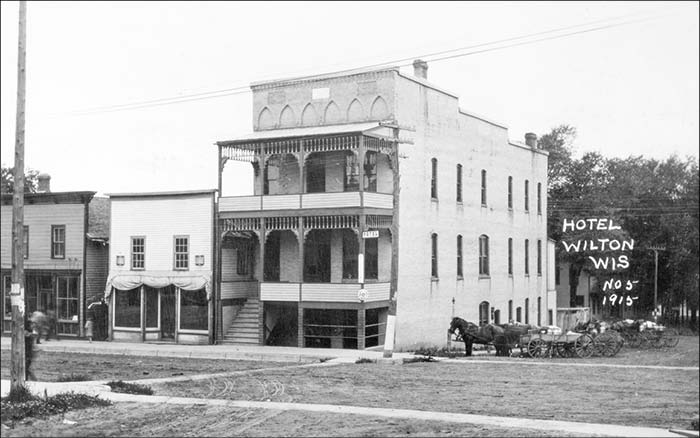 The Mansion House, located at the corner of Main Street and Highway 71 in Wilton, served travelers in an era when the Chicago & North Western Railroad line still crossed the village.

Built in 1898, the building was torn down after World War II, according Wilton history buff Florence Dougherty.

She recalled playing in the then-empty building as a child. A bar was on the first floor, she said, and a kitchen area and dining room were located upstairs.

Next door, in the building between the Mansion House and the current Hardware Hank building, an area was set up for wives to await their husbands’ departure from the hotel’s saloon, to which women were not allowed entrance, Dougherty said.

Not long after the stately establishment was built, it was the scene of a tragic episode: in October 1899, a man was found shot dead in one of its rooms.

The following article ran in numerous newspapers statewide, including The Daily Tribune of Wisconsin Rapids and the Eau Claire Leader-Telegram, in early February 1900.

What promises to be a most sensational murder case has just been unearthed at Wilton, a village in Monroe County, 18 miles from Sparta, the county seat.

Last October, it was published that James Lewellin, a young farmer who resided near Waterloo, this state, had gone to Wilton, Monroe County, with several hundred dollars with which he intended to purchase a dairy farm, that he lost the money gambling with a hotelkeeper named Daniel Trump, and that after his money was gone young Lewellin committed suicide by shooting himself.

A coroner’s jury was summoned and an inquest was held and a verdict of suicide was returned. But Lewellin’s relatives were not satisfied, and for weeks a quiet investigation into the facts in the case had been going on, conducted by Attorney T.L. Davies of Waterloo, Jefferson County, this state, assisted by Emerson Jackson, a veteran detective of this city. They have completed their work and as a consequence the authorities will be asked to bring the guilty party or parties to justice.

Sworn statements of Attorney Davies have been placed in the hands of the authorities, in which all the facts developed are stated, also a copy of the letter of District Attorney Altizer to Lewellin’s father, in which Altizer states his belief that the man named in the affidavits, if not the actual murderer, is the instigator of the crime.

The matter will be placed in the hands of Judge O.B. Wyman, now holding circuit court in this city, and he will be asked to take action.

Story of the tragedy

The attorney and detective who have been examining into the case have sworn in a statement presented to Judge Wyman that James Lewellin arrived in the village of Wilton on Saturday, October 28, having left Columbus, Wis., the night before. They claim that he went to the Mansion House, run by Daniel Trump, and deposited with him $360 for safe keeping.

Lewellin had come to Wilton to buy a dairy farm and on Sunday he drove out to a farm near the village. He returned to the Mansion House about 6:30 o’clock in the evening. He asked Trump for his money, but the man replied that it was locked up and that he could not get it for him until the next morning.

After a short time Trump closed up the bar-room, leaving in it only two or three men of his acquaintance, himself and Lewellin. The next seen of the young man was 4 o’clock Monday morning. A citizen of Wilton, who had been up most of the night with a sick friend, met Lewellin coming out of the hotel. He was very much under the influence of liquor and staggered as he walked. He was subsequently seen reentering the hotel.

The next day Lewellin was seen about the village looking for Trump, as he wanted his money. In the afternoon Lewellin purchased a revolver and some cartridges. He returned to the hotel. This was the last seen of him alive.

Discovery of the body

About 6 o’clock that evening, several hours after the shooting, chambermaids who had thought they had heard shots early in the afternoon went to Lewellin’s room to make up the bed. Lewellin was found lying on a bed with his left hand in his pants pocket and his right hand a little above the top of his head, while a revolver lay a few inches from it, with three chambers empty. There was a second hole in the left breast and another one also in the breast. Lewellin had been dead for several hours.

At the inquest the local physician testified that any one of the wounds was sufficient to have caused instantaneous death.

Trump testified at the inquest that Lewellin had not been given liquor during his stay at the Mansion House. The jury brought in a verdict of suicide

A civil suit is pending against Daniel Trump, in the which the relatives of Lewellin sue Trump to recover money alleged to have been taken from the late James Lewellin. In this civil action United States District Attorney D.F. Jones of Sparta is the attorney for the relatives of Lewellin, and he seeks to recover the money on these grounds: First, that Lewellin lost the money at Trump’s gambling table; second, that the money was originally deposited with Trump for safekeeping as an innkeeper, and the return of the money refused.

Newspapers reported the following on March 7, 1900:

It is currently reported about Sparta that Daniel Trump, now in the Monroe County Jail in this city, awaiting the result of preliminary examinations on charge of murder, has sold his hotel in Wilton, the Mansion House, the scene of the supposed murder of James Lewellin last October, to Hayward Bros. of Wilton, and that they paid $6,300 for the property as it stands.

The Wood County Reporter of Grand Rapids, Wis., reported this on March 22, 1900:

The case against Daniel Trump, arrested on the charge of murdering James Lewellyn in Wilton, was dismissed yesterday owing to lack of evidence.

Daniel Trump left Wilton, eventually settling in Baraboo, and died in 1932 at age 75.