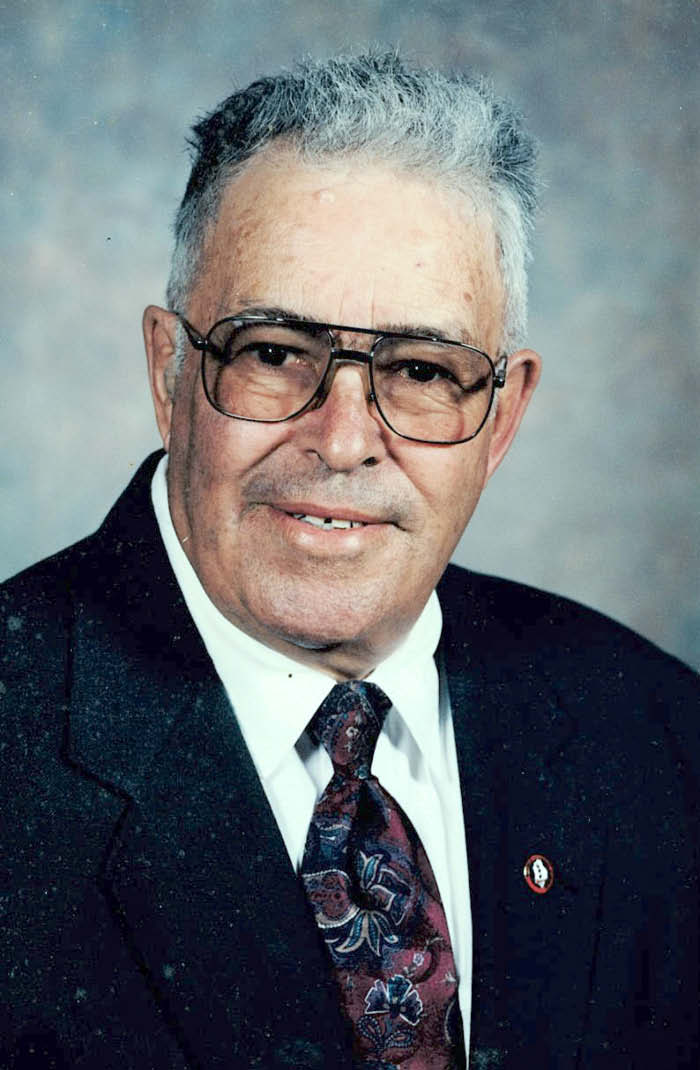 The golden voice of a prominent auctioneer in Monroe County is now silent.

Robert Brandau has passed away.

Robert “Bob” R. Brandau, 90, of South Ridge peacefully passed away Sunday, Dec. 8, 2019, surrounded by his family, on the home farm where he was born.

Bob was a lifelong member of St. Matthew’s Evangelical Lutheran Church on South Ridge, where he was baptized and confirmed. He served twice as the president of the congregation. He was a faithful servant and often said, “God’s been good to me.”

The story of this colorful character began Sept. 1, 1929, when he was born to Rudolph and Anna (Birkholz) Brandau. The world would be forever changed by Bob’s profound ability to bring people together with a collective purpose. Rarely would you find a person who knew Bob who didn’t have a story to tell about a shared experience. Whether it be the setup for an auction or preparing for an event or card game or the building or repairing of something, Bob generally needed an entourage of people to help out with his “projects,” and he had an uncanny ability to recruit just the right people for the job. He woke up every day with a strong purpose and found people to buy into his ideas.

In 1950, Bob followed in the footsteps of his Uncle Conrad and became an auctioneer. He graduated from Reisch Auction School in Mason City, Iowa. Auctioneering was his life passion and a skill that he retained until his passing. It didn’t matter if it was a 25-cent box of trinkets or a $1,000 Holstein cow, he loved the auction method and firmly believed in it. He began selling for Randall Livestock in Tomah, and later sold at livestock markets in Coon Valley, Wisconsin Dells, Viola and Augusta. Bob called hundreds of on-site antique, household and farm auctions for other companies before his daughter, Mary Jo Hill, and son, Ken, joined him in founding the Brandau-Hill Auction Company.

As he began auctioneering and milking cows on the home farm, a cute little teacher at the one-room schoolhouse in South Ridge caught his attention. According to her, “He had a humble, caring spirit, but he drove too fast and had loud Hollywood mufflers.” Boy, was she impressed. On June 23, 1954, Bob was united in marriage to Alice Anderson, who became his tireless partner in a whole host of adventures. Those adventures included having five children, several business start-ups, and literally thousands of potential projects that he hoped would all come to fruition.

Alice spent her lifetime with Bob just trying to keep ahead of his next big idea. He conjured up lists of things he still needed to do. He talked about having more small-animal auctions. He wanted to paint the fence by the house. He thought he’d buy a different truck in the spring. The ideas never stopped. Remember that this is the man who had a prosthetic leg, who hadn’t driven in over a year, and spent the majority of his day in a lift chair at South Ridge. His brain never shut off. He could always do more.

Bob was a fearless entrepreneur, a risk-taker, and someone who could visualize things before they existed. He was especially committed to the success and development of the community of Kendall. In 1969, he purchased a livestock buying station from Adolph Wopat and built R. Brandau Livestock, which opened on Oct. 29 that same year. The livestock barn was one of the greatest accomplishments of his career, as it provided a market for buyer and sellers for 50 years. Whether it be the dairy, horse or small-animal sale, he thoroughly enjoyed interacting with the hundreds of people who came to the sale barn. He loved building community and providing space for people to connect. In the mid-1980s, he built the Round House Express, a convenience store in Kendall, and later built a second store, 71 Express, in Norwalk.

Bob was a member of the Kendall Lions Club for 50-plus years and served as the auctioneer for their annual auction for 48 years. He received the Knight of Sight Fellowship and the Melvin Jones award, which is the organization’s highest honor. He was also a strong supporter of the Wisconsin Auctioneer’s Association. He was elected president in 1976 and received the prestigious Hall of Fame award. Bob was a member of the Wisconsin State Legislative Board, which initiated the first license for auctioneers and was a member of the National Auctioneer’s Association for many years. His community service extended beyond Kendall, as Bob donated his auction skills by selling millions of dollars in support for the National Turkey Federation, Ducks Unlimited, Whitetail Deer Association, NRA, and countless other benefits.

Bob’s grandchildren all knew that gatherings would include at least one game of Crazy 8’s or euchre. Put a deck of cards in Bob’s hand, and his entire demeanor changed. His face would light up, he’d get a twinkle in his eye, and his entire vocabulary changed. He’d often times “play it alone” when he had no business even bidding in the first place … and he’d “make it.” He treasured the Canadian fishing trips with them and watching their various sporting events. In these times, they experienced a youthful, confident and spirited grandpa whom they all cherished.

As Bob’s health declined, Alice, their children and families literally wrapped their arms around him and provided all of his care. He was extremely grateful to have them in his life and considered them one of God’s greatest blessings. He cherished Alice and his children above all else. Working together with them on the farm, at an auction, or at an event was what he loved. He knew he had succeeded as a father because he raised God-fearing, hardworking and community-minded children. Alice was the absolute love of his life, and he was so grateful for her constant care and compassion, especially the past three years. She was his faithful servant through it all.

Preceding him in death were his parents; his sister, Norma Jean, and her husband, Ellsworth Steuck; a grandson, “Andy” Brandau; and his brother- and sister-in-law, Norman and Margaret Anderson.

A funeral service will be at 11 a.m. Saturday, Dec. 14, at St. Matthew’s Evangelical Lutheran Church, County Highway Z, Ontario, Wis. Relatives and friends are invited for a time of visitation on Saturday at the church from 9 a.m. until the time of service.

The family would also like to invite all family, friends and auction acquaintances to a celebration of Bob’s Final Auction at the Kendall Community Hall at 1 p.m. Saturday. It will be a time of sharing, bidding and honoring the legacy of Bob.

In lieu of flowers, the family requests memorials be made to Time of Grace, St. Matthew’s Lutheran Church or the Kendall Public Library.