Monroe County and World War I 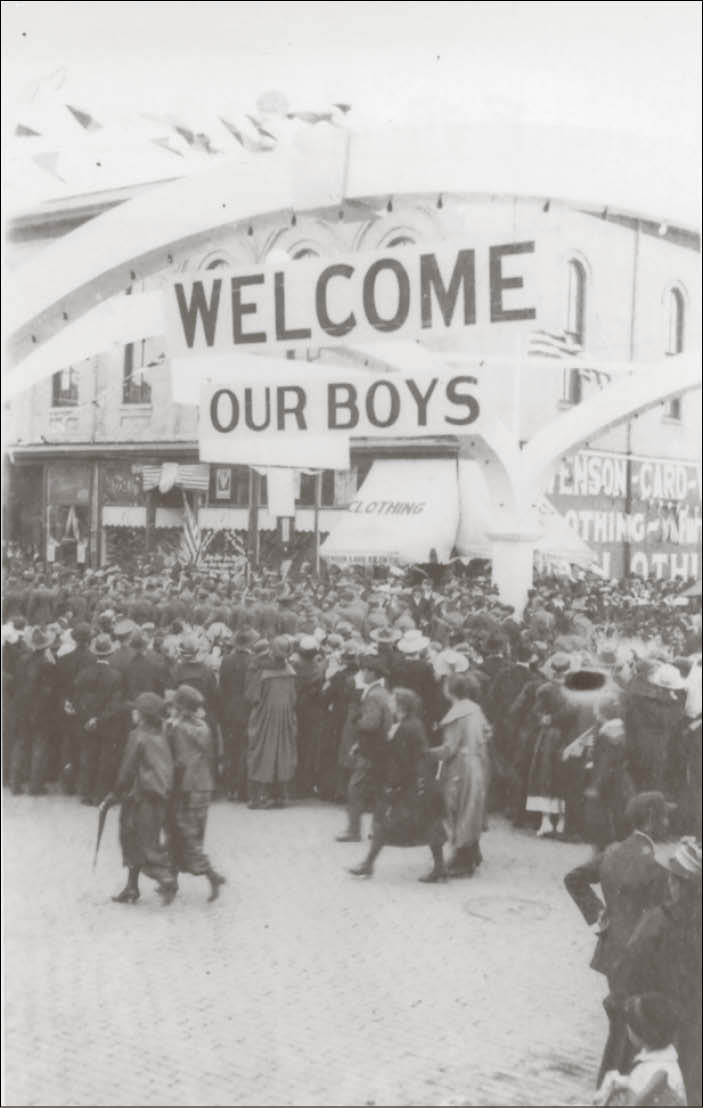 “Image of the “Welcome Our Boys” parade held in Sparta on May 19, 1919, for the returning men of the 32nd Division. The arches in the background were erected at the intersection of Oak and Water streets as part of the parade.

Author’s note: In 2018, the United States recognized the centennial of its involvement in World War I. The U.S. was in World War I from April 1917 until the Armistice ended it Nov. 11, 1918. Both the Sparta and Tomah National Guard companies were ordered to federal active duty as rifle companies in the 128th Infantry Regiment of the 32nd Infantry Division. Hundreds of county residents served in the armed forces during the war, and 41 died while in the service. Countless others supported the nation’s war effort at home.

The Monroe County Local History Room has been partnering with this newspaper to publish transcriptions of letters written by Monroe County soldiers while serving in Europe during World War I. We also shared articles about what life was like for those living in Monroe County during the war and explored the topic of anti-German sentiment during World War I. These letters and stories are intended to help us better understand what it was like for Monroe County residents to endure the “war to end war,” whether on the front lines or on the home front. This final installment examines the grim reality of war and its lasting effects on those who returned from overseas and hoped to settle back into their pre-war lives.

Because soldiers returned in waves, celebrations were held throughout 1919. The Red Cross organized multiple banquets; the final one, held in May, was attended by “about 280 soldiers, sailors and marines,” along with members of the community. And for the Fourth of July, Sparta planned a demonstration “which will surpass anything ever put across by a city of this size.” Among the festivities offered were a barbecue, movies, dances, and ball games, all of which were free to those in the military.

Many soldiers returned with scars from the war, both seen and unseen. Archie Berlin, who was discharged in 1918, was one of many who arrived home suffering from shell shock. Those who had survived gas attacks, like Edward Denomie, found certain tasks unbearable; when a doctor warned him against working in an auto shop because of his damaged lungs, Denomie got a job with the railroad instead.

Some did not return at all. Forty-two soldiers from Monroe County died while serving. Eugene Oakes of Sparta was killed in action on May 21, 1918, the first to die in battle. He was 23 years old and the only child of Mr. and Mrs. Simeon Oakes. The last to die in battle were DeWitt Farnham and Archie Robinson, both of whom were killed on Nov. 7, 1918, four days before the armistice was signed.

However, almost half of the 42 casualties were victims of disease rather than bullets, gas, or cannons. The United States had joined the war just as the Spanish flu made its first appearance stateside; that so many people would now be confined to small quarters, such as camps and ships, was an invitation for the disease to spread much more rapidly and with greater devastation. What’s more, pneumonia and meningitis were rampant throughout Europe, made all the worse by living conditions on the battlefield.

Soldiers were not the only people susceptible to disease. Kathryn Linehan, a 29-year-old Army nurse from Tomah, contracted the flu while caring for soldiers at Camp Taylor in Kentucky. The disease weakened her until she lost consciousness and died. The Tomah Journal noted that she cared for soldiers throughout her illness, positing that she was the victim of over-exertion and fatigue due to the shortage of nurses. Linehan was buried in Tomah with military honors. She was the only woman from Monroe County who died while serving during World War I.

Over time, the veterans of Monroe County settled back into domestic life as best they could. Some opened businesses; others started families, or added to them. A few died while still young, having survived the horrors of battle but not life at home. Years passed, and many of those soldiers were old men, even grandfathers, by the time America entered another world war. Soon, more than a few would watch their children enlist, just as they had done more than two decades earlier. “Our boys overseas” now became the parents of a new generation of soldiers and nurses, waiting anxiously for the war to end and their children to come home safe.