Monroe County and World War I: ‘The War to End War’ | Part III: Life on the home front 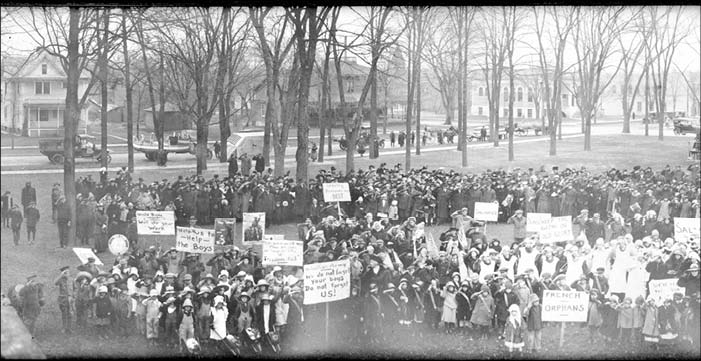 Author’s note: The United States is currently recognizing the centennial of the United States’ involvement in World War I. The United States was in World War I from April 1917 until the Armistice ended it on Nov. 11, 1918. Both the Sparta and Tomah National Guard companies were ordered to federal active duty as rifle companies in the 128th Infantry Regiment of the 32nd Infantry Division. Hundreds of county residents served in the armed forces during the war, and 41 died while in the service. Countless others supported the nation’s war effort at home.

On April 6, 1917, the United States formally entered World War I.

The news was far from surprising. After all, the war had been raging for almost three years, and by 1917, many saw America’s entry as inevitable. Nevertheless, this meant millions of Americans would soon leave their homes and schools for military camps throughout the country, and then travel across the ocean to fight in “the war that will end war,” as it was christened by writer H.G. Wells. The possibility that these fathers, brothers, and sons might not return weighed heavy on the entire country.

This news also meant vast changes for those staying behind. Elected officials made it known that sacrifices would need to be made, and most Americans were prepared to make such sacrifices.

One of the easiest ways for residents to support the war effort was through LibertyBonds, which were sold in drives. Because the least expensive Liberty Bond cost $50 — a staggering sum at the time — people often paid subscriptions rather than the whole sum. Others pooled their money to buy one. Students held fundraisers, even canceling their junior prom to host a fundraiser instead. Eventually, a 20-foot thermometer was attached to the side of a business in downtown Tomah to track the city’s donations. By war’s end, lists of those who had not paid their annual allotments were run in newspapers as a way of shaming them. R.B. Graves, who ran the Liberty Loan campaign, dubbed them “slackers.”

Others chose to donate their time and energy. The Red Cross held daily meetings during which volunteers could knit and sew items for the war effort, including shirts, socks, sweaters, pajamas, hospital linens, bandages, and surgical dressings, among other items. Towns and villages throughout Monroe County held a friendly competition with one another to see who could produce the most items.

Being at war also meant changing daily habits. “Bullets Without Bread Will Never Win This War” announced one advertisement, which encouraged citizens to abandon store-bought items and instead grow their own food in gardens. The ad even identified which vegetables offered the highest yield, which were the easiest to grow, and which could be harvested in both summer and winter.

An editorial in the same paper insisted that farmers “should try for the greatest possible yield from every foot of his land. There is no possibility of over-production.” This sentiment was shared throughout the county. To assist farmers, a scientist from Madison named J.D. Imerie was appointed Emergency Food Agent for Monroe County, and his advice was printed in local newspapers.

Imerie also oversaw a program by which anyone who didn’t live on farms could volunteer to assist farmers — all they had to do was fill out an application printed in their local newspaper and mail it in. A similar program, the Boys Reserve, encouraged young men to spend their summers on farms, where they helped plant and harvest crops. This became so popular that an unnamed woman demanded to know why there was no Girls Reserve to help farmers’ wives.

By October, hotels and restaurants began observing “meatless” Tuesdays, when no meat dishes were served. Though the move would help save food, one local newspaper predicted pushback.

“Let it be understood,” the paper wrote, “that the man who complains of a meatless day is not a patriot and is going to be very unpopular in our town.”

One social club even announced that they would offer a “wheatless, meatless, and sugarless three-course luncheon” at its meeting.

In January 1918, the nation’s Fuel Administrator implemented new rules to help conserve power. Businesses began closing at noon on Mondays, and any electric signs were shut off. Primary schools closed during the winter months and reopened in April. Because coal was needed overseas, wood became the preferred method of heating homes, and Cut-a-Cord clubs were begun to prepare enough firewood. Coal was still available, thanks mainly to the ore docks in northern Wisconsin, only now it was sold “in doses that could be measured by a teaspoon,” and at least one newspaper carried the story of coal trucks being raided by desperate citizens.

Many of these restrictions, including “meatless” days and businesses closing at noon, were lifted well before the war ended. In fact, Liberty Bond drives were one of the few aspects of the home front that continued long after armistice, though they too would eventually end. When the United States officially entered World War II, many of these changes would be implemented again, albeit to a greater degree. The home-front experiences of World War I would slowly be overshadowed, even forgotten.

However, there is one vestige of World War I that remains with us today, though few people recognize the Great War as its source. As part of the drive to conserve fuel, the federal government instituted daylight saving time to guarantee the American public was using as much sunlight as possible. Now, a century later, every veteran of the war has passed from our world, but daylight saving time remains.

Author’s note: Learn more about life during World War I by visiting www.MonroeCountyHistory.org.