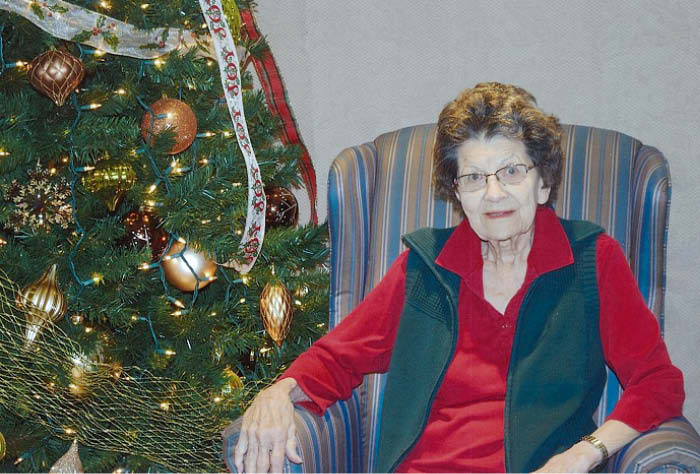 Harriet was born Feb. 18, 1926, to Alfred “Sandy” and Helen (Schlig) Schotten in Norwalk. She attended Norwalk Grade School and Norwalk High School until 10th grade, when the family moved to Chicago. She graduated from high school there and began working in Chicago, but her birthplace called her back. She returned to Norwalk, where she met Quentin “Kot” Kroeger. They were united in holy matrimony in 1952.

While Harriet raised her family, she was also employed at Fort McCoy, the Dodge and Davis Store and Sears Catalogue Department, all located in Sparta. And for many years she was a fixture at the Norwalk IGA.

Harriet enjoyed life; some of her favorite things were riding motorcycle with Kot, cooking and baking Sunday dinners for the family like her mom used to do, watching the Green Bay Packers, and taking trips and going gambling with her cousin Fern. Harriet adored her grandchildren and was proud to say she attended every one of their high school graduations.

Harriet was preceded in death by her husband, Kot; her parents; a dear granddaughter, Margo Degenhardt; a brother and sister-in-law, Lude and Gerry Schotten; and a daughter-in-law, Debbie Kroeger.

Harriet is survived by her children, Jeff Kroeger of Conover, Wis., Karl (Julie) Kroeger of Mankato, Minn., and Ann (David) Degenhardt of Sparta; seven grandchildren, Matt (Ashley), Nick, Luke “Bubba,” Joe (Kallie), Jill, Quincy (Neca) and Logan; six great-grandchildren (with one on the way), Atlas, Payne, Case, Evelyn, Killian, and Roaree; her companion, Angel, the cat; along with other relatives and friends.

A Mass of Christian Burial will be at 11 a.m. Saturday, March 2, at St. Patrick’s Catholic Church, Sparta. Father Eric Berns will officiate. Burial will follow in the St. Augustine Catholic Cemetery, rural Norwalk. Family and friends are invited for visitation Friday, March 1, 2019, at St. Patrick’s Catholic Church, beginning with a vigil prayer service at 3:45 p.m. Visitation will continue from 4–7 p.m. at the church. Visitation also will be Saturday from 10 a.m. until the time of service at the church.

Harriet’s family would like to thank the Gundersen Hospice organization and the Morrow Home, especially the family they made at Bridge Path, for their genuine love and support. In lieu of flowers memorials may be made in Harriet’s name to a local Alzheimer’s group of your choice.