Barred from clinic during the pandemic, nursing students find a way to help 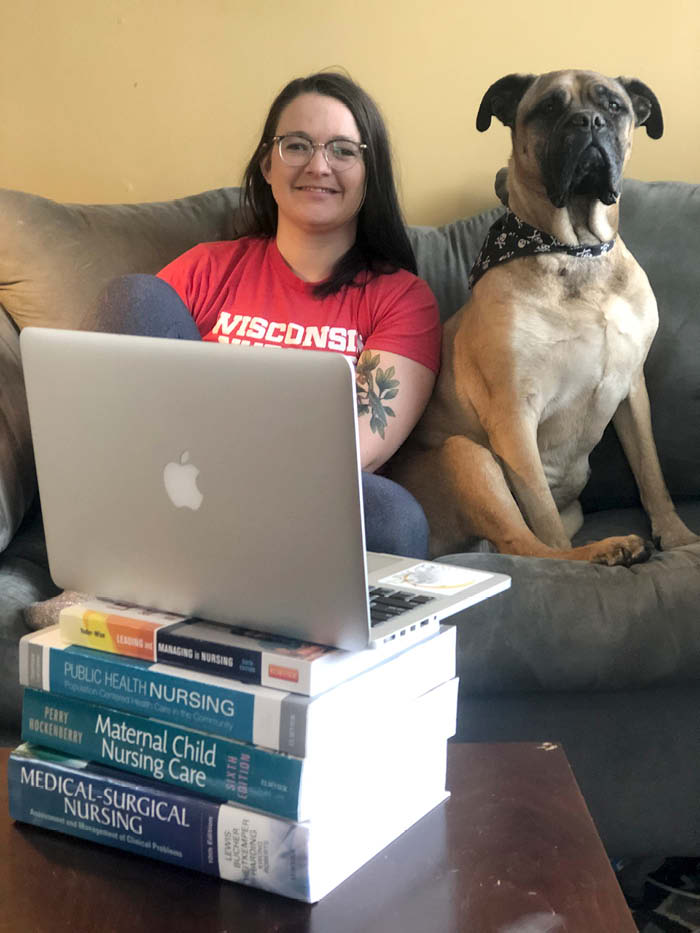 University of Wisconsin School of Nursing Student Keeley Johnson Crosby sits at home with her dog Dotty. Crosby is one of 201 nursing students set to graduate in May. The school has moved all learning online in response to the COVID-19 pandemic. 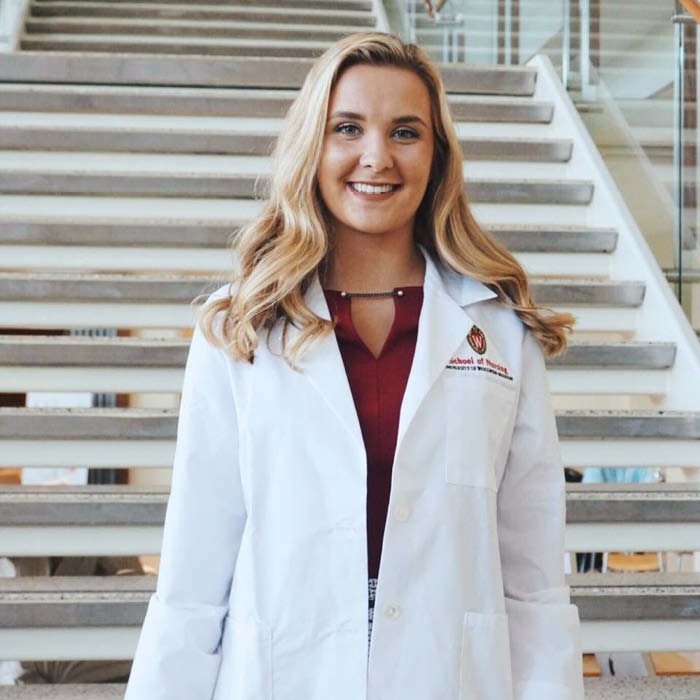 Keeley Johnson Crosby already had a bachelor’s degree in Spanish when she returned to school to become a nurse.

“A certain kind of person is drawn to this profession,” Johnson Crosby says, “somebody who really values self-sacrifice and working towards the greater good.”

Johnson Crosby is finishing her final semester of nursing school at the University of Wisconsin-Madison. Under most circumstances, she would be poised to start her final clinical rotation at University Hospital while preparing to join the workforce in May. Then the coronavirus pandemic swept into Wisconsin, making this year anything but normal.

In February, UW Health barred students from going into rooms at the hospital that require personal protective equipment like gloves and face masks during what was already a heavy flu season. The fast-spreading coronavirus has since forced the nursing school to move all learning online, ending students’ interactions with real patients at a time when hospitals need more help than ever.

Johnson Crosby says she feels “stuck,” unable to help out during an unprecedented public health emergency. She and her fellow nursing students want to pitch in, Johnson Crosby says, and she initially worried she would lack enough clinical hours to qualify for her state nursing license.

Dr. Linda Scott, dean of the UW School of Nursing, dispelled the later concern. All 201 of the school’s final-year nursing students remain on track to graduate, she says.

The school requires more training hours for degrees than the state requires for its licenses. Plus, research by the National Council of State Boards of Nursing says effective training for nurses can include up to 50 percent simulation, like the UW’s online learning plans.

UW nursing students will remain below that threshold.

“This has been something that they have worked hard for, and they want to be able to deliver the care that they’ve had the education for,” Scott wrote in an email. “We’re going to do everything possible to make sure that that happens.”

UW senior Marcela Hanson and other students are still searching for ways to help out during the unprecedented healthcare emergency.

Hanson works as a University Hospital nursing assistant while taking classes, and a colleague told her that many healthcare workers were struggling to balance work and childcare after Gov. Tony Evers shuttered schools to slow the COVID-19 outbreak. That sparked an idea: Hanson and her fellow nursing students could watch the children, since they would remain in Madison for classes.

Hanson shared the idea on her graduating class’s Facebook page, and received a strong response. She created a spreadsheet with the names and contact information for nursing students willing to help — 15 so far — and sent it to “basically every nurse and physician I know.”

Scott wrote that she is proud of her students for their “leadership, commitment and compassion,” adding: “It’s what Badger Nurses do!”

Hanson and some other students will volunteer their time. Others may get paid, depending on the needs of the students and hospital staff, Hanson says.

“In a time like this where everyone’s scared and uncertain of what’s going to happen next, I think it’s so important to build upon the community that we have,” Hanson says, “to find some light in this scary time.”

Johnson Crosby is among the students who signed up to help. She says the effort reminds her of why she turned to nursing in the first place.

This story comes from a partnership of Wisconsin Watch and Wisconsin Public Radio. Bram Sable-Smith is WPR’s Mike Simonson Memorial Investigative Fellow embedded in the newsroom of Wisconsin Watch (www.WisconsinWatch.org), which collaborates with WPR, PBS Wisconsin, other news media and the University of Wisconsin-Madison School of Journalism and Mass Communication. All works created, published, posted or disseminated by Wisconsin Watch do not necessarily reflect the views or opinions of UW-Madison or any of its affiliates.